The Embraer Phenom 300 For Sale

Known mostly for their airliners, the Brazilian based company Embraer announced the Phenom 300 in 2005. It had its first flight in 2008, then began sales and deliveries in December 2009. This aircraft has actually been one of the most delivered business jets from 2013 to 2015.

The Phenom 300 is a slightly bigger aircraft and upgrade to the Phenom 100 very light jet. Early this year, Embraer made significant upgrades to the 300 model. Some of these upgrades include maximum speed increase, increased engine thrust, quieter cabin, increased range and more. 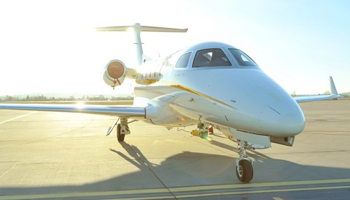 The EMB-505 is a light jet that can carry up to 9 passengers and a two pilot crew. An additional passenger may also be added during single-pilot operation. After upgrades in 2018 and 2020 (300E), this aircraft is powered by two rear pylon mounted Pratt & Whitney Canada PW535E1 turbofan engines with increased thrust of 3,478 pounds-force (lbf). *moderated by FADEC systems.

The cabin included in this aircraft has a height of 4′ 11″ ft, a width of 5’1″ ft and a length of 17’2″ ft. It includes 11 windows for excellent natural lighting, along with an externally serviced rear lavatory, refreshment center and a fairly large rear baggage area. The lavatory is fully enclosed and features two large windows, a mirror and and optional sink.

In terms of Avionics, the Phenom 300 uses the Garmin G3000-based Prodigy Touch along with ground power mode for engines. This system is renowned for its ability to help reduce pilots workload and make landing and approaching easier.

Get more info on the process of how to buy a private jet. Or, click here to go back home.