The Gulfstream V For Sale

The Gulfstream V (G5) had it’s first flight in 1995 and is an upgrade to the G4 model. It is said to be designed as a competitor to the Bombardier Global Express and is known to be one of the first ultra-long range business jets from the company. Around the time of its production, it was known as one of the longest range business jets available in its class. It entered into service in 1997 and has a few variants, including one for the US military / Air Force.

Before halting production in 2002, Gulfstream had manufactured 193 models of the GV aircraft. It is considered very versatile and reliable in terms of construction. And besides the military, is used in situations such as medical evacuation, maritime patrol, weather research and more. 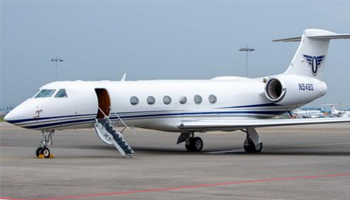 The GV is powered by two Rolls-Royce BR710 engines with 14,750 pounds thrust each. It has a maximum cruise altitude of 51,000 ft, along with a maximum cruise speed of Mach 0.885. This aircraft can seat up to 18 passengers including pilot and crew and has a maximum flight range of approx 6,500 nautical miles (12,000 km).

With up to three to four living areas / zones. The cabin is similar to the G4 and said to be smaller than the Global Express. The fuselage in the GV was extended by approximately 5 ft in the front and 2 ft in the tail section. This extension allows for more room in the cockpit, the kitchen, baggage compartments and other areas throughout the aircraft.

The cabin in this aircraft measures 6’1″ in height, 7’3″ in width and 50 ft 10″ in length. The internal baggage compartment can hold approximately 226 cubic feet, which has increased with the extended length of the cabin / fuselage.

The avionics included with the GV is provided by the Honeywell Primus Epic PlainView Cockpit. Which also includes Gulfstream’s Enhanced Vision System, along with full authority digital engine controls (FADEC).

To navigate back home, click here. Or, click here to learn more about the Embraer Phenom 300 for sale.

The Gulfstream G450 For Sale

The Gulfstream G700 For Sale